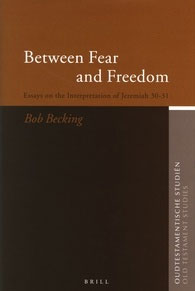 51. Between Fear and Freedom: Essays on the Interpretation of Jeremiah 30-31

Jeremiah’s “Little Book of Consolation” is an intruiging text that provokes a series of interpretative difficulties. Is the text originally from Jeremiah? Can it be construed as a literary coherence or is a complex literary process of emergence to be accepted? What is meant by the ‘New Covenant’?
In this monograph Jer. 30–31 is read applying a variety of methods. The text-critical chapter argues for the reinforcement of the editorial theory according to which MT and LXXJer. are to be construed as two different versions. Much attention is paid to the delimitation criticism of these two chapters leading to the assumption that they are composed of ten Sub-Cantos.
Five of these Sub-Cantos are interpreted taking into account Ancient Near Eastern textual material in order to understand the mental framework of the ancient reader. The final chapter pleads for the conceptual coherence of Jer. 30–31 which is seen as based on the idea of divine changeability.