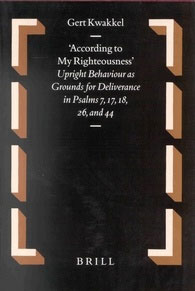 Interpretation of the psalmist’s assertions about their upright behaviour towards God or men in Psalms 7, 17, 18, 26, and 44.
After a short introduction, the study presents a detailed analysis of Psalms 7, 17, 18, 26, and 44 (text, philology, exegesis). It evaluates previous views of the intention and setting of the psalmist’s claims regarding their upright behaviour, such as Beyerlin’s theory that the psalms involved were originally used as prayers in a cultic trial by ordeal. It presents a new hypothesis with respect to the purport of the claims.
Its subject matter and method make this study particularly useful for all those studying the Hebrew Psalms. Furthermore, it deals with an important topic of the anthropology and theology of the Old Testament, viz. human righteousness towards God.