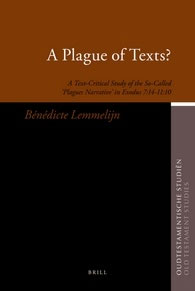 Prior to any attempt to study a text at the literary level, the textual material itself has to be carefully established. It is for this reason that the present volume is devoted to a detailed text-critical study of the ‘physical’ text of the ‘Plagues Narrative’ in Exod. 7:14–11:10. In the first chapter, the author formulates a number of prolegomena relating to textual criticism as a discipline, the extant textual material, the terminology employed and the methodological model that serves as the basis of this study. In the second chapter, data provided by the various textual forms of the ‘Plagues Narrative’ in Exod. 7:14–11:10, namely MT, LXX, SamP, 4QpaleoExodᵐ, 4QpaleoGen-Exodᶩ, 2QExodᵃ, 4QExodᶜ, 4QGen-Exodᵃ and 4QExodʲ, are registered and described. The extant textual versions themselves are presented in the form of a synopsis, added as an appendix to this book. The third and final chapter offers the text-critical evaluation of all ’text-relevant’ variants.