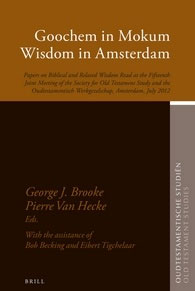 68. Goochem in Mokum, Wisdom in Amsterdam

This collection of essays is focused on the wisdom traditions of the Hebrew Bible, including the Book of Sira. The Biblical books are read as literary works on their own as well as in an Ancient Near Eastern setting. Some essays scrutinize Greek and Hellenistic wisdom traditions. The authors refrain from a definition of ‘wisdom’ which would have been a reductionist exercise in view of the great variety of material and the complexity of the perennial problems (wo)mankind is confronted with.
bestellen
© 2007 - 2021, Het Oudtestamentisch Werkgezelschap
Webmaster: Mart Jan Luteijn